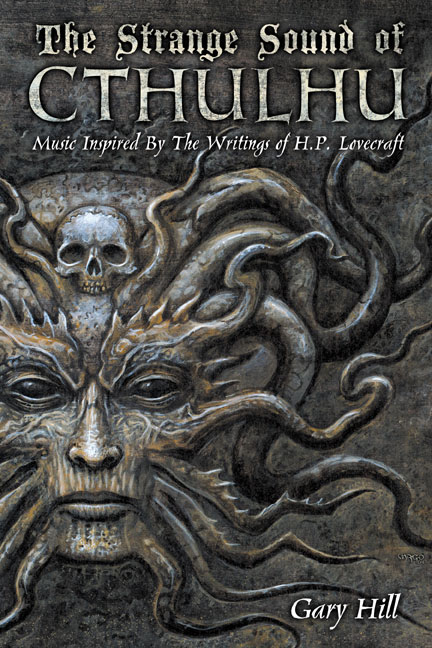 If You Have Any Questions, Please Email Me

Written by the Creator of Music Street Journal

Check the Myspace Blog for excerpts from the book

Here is an excerpt from Mr. Joshi's Foreword for the book:

Now, as Gary Hill's fascinating book attests, Lovecraft has served as the inspiration for a succession of rock musicians over the past forty years or more. Lovecraft himself regretfully admitted that he was not a trained musician and could not appreciate the greatest fruits of Western musical culture-the work of Bach, Beethoven, Brahms, and others-but instead found innocent pleasure in the barbershop tunes of his boyhood or in such popular songs as "Rule, Britannia" or "It's a Long Way to Tipperary." And yet, Lovecraft did inspire at least one classical musician: his friend Alfred Galpin, who upon Lovecraft's death wrote the poignant piece for solo piano, "Lament for H.P.L." Galpin, starting out as a student of French literature, later turned to music and became a composer and pianist, living for most of his adult life in Italy. During a 1977 conference on Lovecraft in Trieste, Galpin played his own composition for the assembled audience of Lovecraft scholars and devotees.


I know of no other instances of Lovecraft inspiring a classical composer or musician, but his influence upon the numerous varieties of rock music-from progressive to heavy metal to punk to Goth-has been well chronicled by Gary Hill. Gary has that rarest of skills among music critics: the ability to describe a song, whether vocal or instrumental, in such a way that readers seem to hear it running through their heads. His coverage-from the 1960s group H. P. Lovecraft to Asmodeus X-is exhaustive and comprehensive, and his sensitivity to the Lovecraftian overtones of songs and albums that do not, at first glance, seem obviously inspired by Lovecraft is impressive. Although my own musical training is largely in the realm of classical music, I gained a real sense of the tremendous impact Lovecraft has had on rock music over the past forty years. Gary has also performed a notable task in interviewing many of the musicians whose work he discusses, so that we have first-hand knowledge of how these artists came upon Lovecraft, what they think of his work, and how their own music is meant to be an homage to the lantern-jawed New England writer.

Updated August 25th - The book now has its own Myspace profile. Add as a friend and subscribe to the blog for all sorts of news.

Updated November 28th - Check out excerpts from reviews below.

...The Strange Sound of Cthulhu is a fascinating compilation of musical artists who have paid homage to the father of modern horror, in turn adding their own new chapters to Lovecraft¹s ever-growing cult mythology. Highly recommended for rock historians and Lovecraft aficionados alike. Russell Williams, Dark Realms Magazine

...Though not without its faults, "The Strange Sound of Cthulhu" is a unique and staggeringly detailed look at a subject that has not been tackled before. I doubt very seriously if anyone else will approach this theme with the thoroughness and painstaking detail that Gary Hill has. It's recommended to fans of both H.P. Lovecraft and strange music. - Dr. Abner Mality - Wormwood Chronicles

...Though Hill claims that the book is in no way exhaustive on the subject, it is as close to being exhaustive as it can get. It is designed to snare the readers that are there for the music to start reading Lovecraft, and the readers there for Lovecraft to look out for the music. I found myself getting out my old music to listen for what Hill describes...- Jeremy Seffens - The Bloodied Quill

The Strange Sound of Cthulhu will serve as an excellent handbook for fantasy fans, music lovers, and Lovecraft followers for many generations. - Lisa Palmeno - Beet Cafe

You can check out an extended excerpt from the book here - http://beetcafe.com/litFeaturesDisplay.cfm?id=1001

Check out the review at the Lulu book page by Robert Zehlin "The Strange Sound of Cthulhu is THE sourcebook on music-related Lovecraftiana, for both fans of american horror-author H.P.Lovecraft and music-fans in general..." www.lulu.com/strangesound

Greg Olma posted this at the same place - "...Not only is this book well documented with album/song refernces, it also contains interviews with the band members giving the reader a bit more insight into what the artist was trying to convey. What I liked most about the book was that it is a great companion to my music collection. I found myself pulling out CDs that I haven't listened to in awhile and almost re-discovering them. You would be hard pressed to find a more thorough book on H.P. Lovecraft and his influence on music." www.lulu.com/strangesound

Also, for a different way to preview the book, you can check out "Yyrkoon's Vision - Extreme Lovecraftian Death Metal." An Amazon short, this is available for download for only 49 cents and is an addendum to the book. It will give you an idea of the flavor and concept of the book for only half a buck. You can check it out here - http://www.amazon.com/gp/product/B000OIZIEG/ref=cm_arms_pdp_dp/002-8839100-6212001.